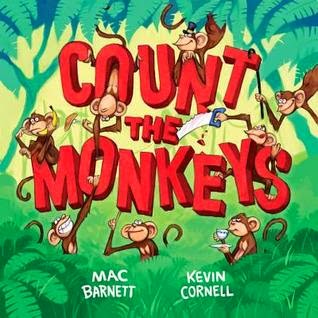 Count the Monkeys was written by Mac Barnett and illustrated by Kevin Cornell. It was published by Disney in 2013. Check out a video of Barnett reading the story.


"Although counting books may tire out jaded grown-ups, a good one will always get youngsters excitedly running through their numbers. Barnett begins with a call: “Hey, kids! Time to count the monkeys!” But his simians won’t show, having been scared off. So who scared them off? Maybe those two mongooses? Or those three crocodiles? Barnett instructs readers to ward off each group of beasts with various techniques. For example, on a page featuring four grizzly bears, the instructions say, “Put your arms above your head! Make a loud roar! Bang together some pots and pans, if you have them.” (This isn’t a book to read during quiet time.) Besides the chance to make noise, kids will adore Cornell’s broadly exaggerated animals, from the toothy monkey grins to the round bottoms of bearded lumberjacks. The whole package has a Saturday-morning-cartoon cheerfulness. And when the monkeys still haven’t appeared at the purported end, never fear. The last spread will keep counters content for a good long while. Adult patience advised." --Booklist Review