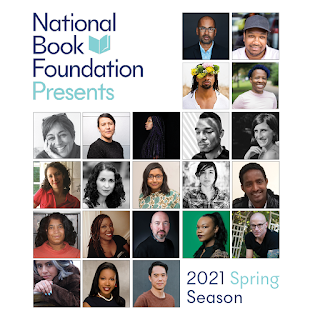 The National Book Foundation has announced its spring NBF Presents lineup of 12 events taking place through June 2021, continuing the programming made possible by a multi-year, $900,000 grant from The Andrew W. Mellon Foundation. NBF Presents, which includes all of the Foundation’s public programs, represents the National Book Foundation’s continued commitment to providing widespread access to high-caliber, topical literary programming for readers everywhere. All announced programming for this season will be held exclusively online and at no cost to viewers.
Posted by Mary Russell at 9:56 AM No comments:
Email ThisBlogThis!Share to TwitterShare to FacebookShare to Pinterest
Labels: Books in General, Cool stuff on the Web, News Clips, Upcoming Events

Kyle Potvin's poems have appeared in Bellevue Literary Review, Crab Creek Review, Tar River Poetry, The New York Times, JAMA, and others. Her work has also appeared in various anthologies. Kyle is cofounder with Tammi Truax of the Prickly Pear Poetry Project: Processing the Cancer Experience Through Poetry, a workshop for survivors and caregivers. A member of the Powow River Poets and Frost Farm’s Hyla Brook Poets, she is an advisor to Frost Farm Poetry in Derry, New Hampshire, and served as assistant director of the New Hampshire Poetry Festival for five years. Kyle runs a public relations firm and lives with her husband and two sons in southern New Hampshire. --Publisher's blurb

Join poet Kyle Potvin when she returns to Gibson's Bookstore to read from her new volume of verse, "Loosen" on Wednesday, January 13th, 2021 at 7pm. This event is online only via Zoom. Registration is required: https://www.eventbrite.com/e/134418133255

Stories from the Rolodex: Important Figures of Journalism in Their Own Words by Beverly Stoddart (Self Published, 2020).

Featuring essays on several local voices from the golden age of journalism (George Regan, Regan Communications, Boston, is the first chapter and he is chairman and CEO of the 6th largest PR firms in the country. John Harrigan is a beloved NH writer known for his Water, Woods and Wildlife column. Joe McQuaid was publisher of the Union Leader for years. Both men give distinct ways of looking at life in NH. John Milne was a leader of NH media and worked politics for nearly half a century.), this book focuses on many news men and women holding up the fourth estate that never made the headlines.   -- Gibson's Bookstore.

In Stories from the Rolodex, you will learn the names of some of the most important figures of journalism who worked in the same era.  You will hear their voices as they tell of reporting from a battlefield in Vietnam, witnessing riots in Boston, covering airline crashes, facing discrimination, and finally being fired for telling the truth. These astonishing stories open new doors of understanding the job of the news as they tell, in their own words, the behind the scenes workings of people who knew how to get the job done. -- Publisher's blurb. 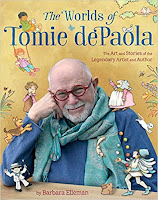 The Worlds of Tomie dePaola: The Art and Stories of the Legendary Artist and Author by Barbara Elleman (New York: Simon & Schuster Books for Young Readers, 2021).

Beloved NH children's author and illustrator Tomie dePaola is celebrated in this upcoming biography about his life and work.

"Tomie dePaola is one of the best-known and most beloved creators of books for children. His art and his stories, which are filled with imagination, humor, grace, and curiosity, represent a love of life that is reflected in everything he does.

Barbara Elleman’s exploration of Tomie dePaola’s career takes a fascinating look at the many worlds dePaola has brought to life through his work: from autobiographical memories to folktales, religious stories, nursery rhymes, and more—including, of course, the inventive world of his most famous character, Strega Nona. Originally published in 1999 and filled with evocative artwork, captivating photographs, and heartwarming anecdotes, this comprehensive book has been updated to cover two new decades of dePaola’s creativity. Elleman’s thoughtful narrative brings a fresh appreciation to the work of a unique author-illustrator, one who is a true legend of children’s literature and a source of lasting joy for generations of readers, young and old." --Publisher's blurb

Posted by Felicia Martin at 6:00 AM No comments:
Email ThisBlogThis!Share to TwitterShare to FacebookShare to Pinterest
Labels: Biography, Book of the Week 2020, Looking for something to read?, NH Authors, NH Illustrators, NH people 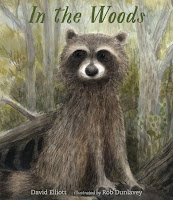 In the Woods by David Elliott (Somerville, MA: Candlewick Press, 2020).

The animals in the dark woods are secretive, their inner lives a mystery. The stealthy bobcat, the inquisitive raccoon, and the dignified bear waking up from his winter nap are just a few of the glorious animals featured in this clever collection of poems and woodland scenes. This companion to In the Sea, In the Wild, and On the Farm is the first collaboration between David Elliott and Rob Dunlavey, whose colorful, expressive art pairs with the author’s charming poems to create a love letter to the animals of the forest. -- Publisher's blurb.

Posted by Rebecca Stockbridge at 6:00 AM No comments:
Email ThisBlogThis!Share to TwitterShare to FacebookShare to Pinterest
Labels: Book of the Week 2020, Children's Literature, NH Authors, Poetry
Older Posts Home
Subscribe to: Posts (Atom)