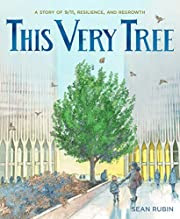 In the 1970s, a Callery pear tree was planted in New York City. And every year, its flowers ushered in the spring. But on September 11, 2001, everything changed. America was gravely wounded, as was the tree. This is the triumphant story of a tree that survived a tragedy--and of a nation in recovery. Told from the tree's perspective, this is a touching tribute to those we lost and to those who, after the towers fell, picked up the pieces, planted a forest, and built a new city.

Sean Rubin was born in Brooklyn, New York. As a city kid, he entertained himself by collecting interesting things, learning about unusual subjects, and by drawing characters from books, especially Redwall and The Lord of the Rings. Bolivar, the first book Rubin both wrote and illustrated, received several awards. He studied art and archeology at Princeton University, where he met his wife, Lucy. They have two sons and currently live in Charlottesville, Virginia, where they enjoy hiking, visiting museums, and drinking chocolate egg creams. Learn more at http://seanrubin.com/