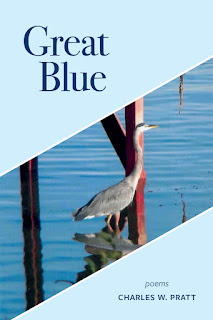 I had the honor and good fortune to spend time with poet and apple farmer Charles Pratt—among other fine NH poets— at Skimmilk Farm workshops over a number of summers.  His work in progress was always carefully chosen, deeply felt, profoundly thoughtful.  If he had concerns about the turn of a line, the shape of a phrase, the exact fit of a word, he put it all out there for consideration—for hard-honed husbandry—for Charlie tended his poems like he did his trees, and only picked the ripe ones.  (See his marvelous collection From the Box Marked Some Are Missing (Hobblebush Books).

Following Charlie’s passing in 2012, his wife Joan found a completed manuscript on his computer titled Great Blue.  Convinced Charlie meant it for publication, Joan has now made it available to us from Pomme Press. It is Great Blue I would like to turn our attention to.  To one of the poems in particular—because this poem shines a light on what makes Charlie’s poetry of praise so urgently pressing:  its clear-eyed acceptance of human folly, human vulnerability; its wise humor; its quiet allegiance to human charity.

Advice to the Tourist

While you linger in the cool

Of quiet rooms to admire,

Bright in the sun your rented car


You gaze at paintings as the door

Submits to the urgent will;

Hands fumble, find, withdraw, and you

And letters that don’t exist


For insurance purposes or thieves?

When the politely bored

Detective has taken it down, consider

What you can or can’t afford.


Tourist, the richest is to forgive.

Forget will do as well.

But if these are beyond your means, imagine


While you linger in the cool

Of quiet rooms to admire,

Bright in the sun your rented car

(Note that this poem was reprinted here with the permission of the publisher.)

No academic profundity here.  Six traditional quatrains telling a not untypical post-modern story:  Foreign country, rented car, museum stop, stolen goods.  When it happens to you, it’s not funny.  But it reads a little humorous here—for the wry way the narrator steps in to review the tourist’s options.  And we get the chance to listen in!

Unlike the detective, we don’t become bored.  If we initially feel sympathy for the tourist and antipathy toward the thief, we are abruptly chastened by the questions posed:  What might the tourist do about it?  What might we do?  And what, after all, has been lost?  Insurance will pay for the material things, fine, but you can’t be reimbursed for the things of the heart—the photos, the letters.   (How careless, tourist, you can be of the heart.)

So let’s look beyond for what might be done next.   You, tourist, are in the thief’s country now.  You had the means to travel here, rent the bright car, drive through the warm weather, park in the hot lot, enjoy the art hanging in the oh so cool walls of the rooms.  Think, tourist, of your nemesis—who could never enter those rooms, never afford that bright car.   Who can only thirst for what you and all tourists so obviously have:  wealth, comfort, cameras, clothes, and the freedom to travel to places like this.  Indeed, think of the hellish life of your thief whose psyche is scorched by this hot desire to take what you have.   What he hasn’t.  What he can never really have.  How he is tortured by it.

Will you forgive?  Can you forget?  Think.  And while you’re at it, consider the way you feel like your thief:  You’ve been robbed!  The way these expensive things mean so much to the both of you.  To all of us.

John Perrault is the author of The Ballad of Louis Wagner (Peter Randall Publisher), Here Comes the Old Man Now (Oyster River Press), and Jefferson’s Dream (Hobblebush Books). His most recent work has appeared in Orbis (UK), Hole in the Head Review, The Aurorean, and Hummingbird. He has a new chapbook forthcoming from Finishing Line Press. John was Portsmouth Poet Laureate 2003-2005 and lives in North Hampton, NH.

This post is part of our celebration of National Poetry Month 2021 for which I asked New Hampshire poets to recommend books of poetry by Granite State poets. These titles are generally available from local booksellers and may be held in public libraries as well. This particular title may be found at Water Street Bookstore in Exeter, NH.