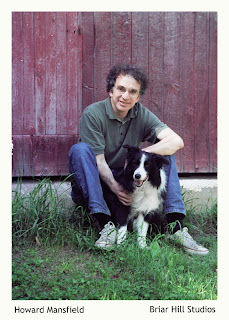 There are a lot of wonderful writers living in our state. As the Director of the NH Center for the Book  I get the opportunity to talk to many of them. This interview series of Q&As with New Hampshire authors here on Book Notes lets me share that experience a bit with my blog readers.  This month we visit with Howard Mansfield.

If someone hasn't read your work yet, where should they start?
I would suggest The Bones of the Earth. It’s book about landmarks of the most ordinary kind – sticks and stones, water and trees. It’s about how we know we are home. Like most of my books it is set in New Hampshire, with the exception of an essay exploring of the wonderful mythology of the Washington Elm, which stood in Cambridge, Mass.

When did you first think of yourself as a writer?
Well, here’s a typical answer: Around 4th grade. Before that I wanted to be Thomas Edison, or an astrophysicist. I was fascinated by astronomy. I had my older brother write for a brochure, “Your Career in Astrophysics.” That brochure changed my life. I can still picture it -- dark brown with black and white photos of men – yes, all men – standing in front of blackboards filled with equations. These guys were grownups but they still had to do math homework! And no one was looking through a telescope. I moved on.

How did you end up living in NH?
We had a good friend who had reported for The Monadnock Ledger. We were living New Jersey where my wife, Sy Montgomery, was a reporter for a Gannett newspaper. She was leaving, so we could live anywhere. Our friend said we should move to the Monadnock region. It’s beautiful, she said, and the rent is cheap.
She was – to steal a line from Faulkner -- wrong about the facts but right about the truth. Great place to live, but not cheap. We arrived in the midst of the 1984 boom and found a place to rent only after pleading with the landlord that we were worthy.

Where do you like to write?
The Chicken Shack. By a stroke of extraordinary good luck our house has a separate studio which was long ago a hen house.  In the morning, tea in hand, I walk down past our barn to a place with no phone, no email, and only the books that I need for what I’m writing.

How important is place in your writing?
Very important. Let me tell you about my first night in New Hampshire back in 1984. We had convinced the landlord to rent us a little carriage house on the Main St. of a small town.  I arrived first and unpacked our things. My first evening, I took a walk around town. There was a small historical society in an old brick schoolhouse smaller than a two-car garage, which was open only in the summer. Inside it was musty-cool, and as disheveled as an attic.
I looked at the items on the shelves. The labels were hand-written in perfect, faded, script: “This tassel formed a part of the decorations of the funeral car which carried the remains of the late President Lincoln….”
The late President Lincoln.
I snapped to attention. Here was a glimpse of a community in the act of remembering. Here was a community creating its history, choosing the stories it would tell about itself, choosing its ancestors, marking out monuments and holidays – choosing who gets to enter the memory house.
Next items on the shelf: Hardtack sent home from the Civil War, a drum that may have been used in the Revolution, the parson’s sermon on hearing of the death of Washington: “Know thee not that there is a prince and a great man fall this day in Israel.” And on it went in that small space.
Memory is a defining characteristic of New England.
I walked out into the twilight a little bit changed. I had studied American history in college, but I didn’t move to New Hampshire to write about it. At the time I was writing for some architecture and design magazines in New York.
I kept looking around at town meetings and Franklin Pierce and Mt. Monadnock, and several years later published my first New Hampshire book, In the Memory House.
More summers on ponds and ridge lines, more traveling locally, and other books have followed: The Same Ax, Twice; The Bones of the Earth; Turn and Jump; Dwelling in Possibility, and an anthology I edited about the Monadnock region: Where the Mountain Stands Alone.
So although I never planned it, I’m still doing what I did my first night in New Hampshire -- walking around, looking at this place, talking to people, and puzzling over and enjoying this craggy corner of New England.

What do you do when you aren't writing?
Hike, kayak, visit friends and family, keep the place up, and await my instructions from our Border Collie, Sally. She’s supposed to be a “working dog,” but she has us working for her.
What's the best piece of advice (writing or otherwise) you were ever given?
Go ahead and fail. In college my friends and I read E. B. White. His impressive collected essays had just been published. We admired his work; it set a high standard. One day my best friend came back from the library where he had been reading about the essayist and told me that White had spent time researching a story about the United Nations when it was new, but he had set it aside.
That was a small revelation. Even E. B. White had started stories he didn’t finish. It’s an important lesson. If you’re going to follow your curiosity there will be many dead ends and wrong turns, but that’s all part of exploring the world.

What books do you love and what about them speaks to you?
A brief illustration is probably better than a list of books. There is a moment in one of Raymond Carver’s late short stories, “A Small, Good Thing.”  Scotty, a child nearing his birthday, suddenly falls seriously ill. His parents begin waiting in the hospital room with him. Hours become days. Doctors come and go. The little boy is in a coma.  The mother walks over to the window. “She stood at the window with her hands gripping the sill, and knew in her heart that they were into something now, something hard. She was afraid, and her teeth began to chatter until she tightened her jaws. She saw a big car stop in front of the hospital and someone, a woman in a long coat, get into the car. She wished she were that woman and somebody, anybody, was driving her away from here to somewhere else, a place where she would find Scotty waiting for her when she stepped out of the car, ready to say Mom and let her gather him in her arms.”
Great books are like this scene. They take us deep into a moment and they look out on a world that is changed and unchanging.

What are you working on now?
A new book to be published September 2013: Dwelling in Possibility. It is a search for the ordinary qualities that make some houses a home, and some public places welcoming. What qualities are missing in our homes? How can we regain them?

What do you want to share that I neglected to ask about?
As a writer, I rely on, and I am grateful for, Interlibrary Loan (ILL). I am not affiliated with any institution. Through the library in our town, Hancock, I am connected to thousands of libraries.
In 2011 there was legislator in the New Hampshire House who thought that ILL was superfluous. He was not reelected and ILL still stands. But these things have a way of coming around again and again, so I wish the legislature would understand two things about this vital service: 1. It is commerce. Writing is my profession. 2. It is culture. I have written seven books that are about New Hampshire.  I’ll have to be immodest here in the interest of stressing what these books have meant to readers. My books have been part of NHPR’s Granite State Reads program and part of the NH Writer Series that is broadcast on NHPTV from UNH. All that’s just a quick way to say that these books are part of New Hampshire’s culture – and these books couldn’t be written without Interlibrary Loan.
Here’s the last thing I wish that the legislature would understand about ILL: It works. It’s not broken so…. Everyone knows how that phrase concludes.

Posted by MaryR at 6:58 AM
Labels: NH Authors, QandA