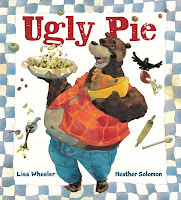 Bear goes wandering through the woods --which are full of colorful detail thanks to the illustrations of Heather Solomon-- in search of ugly pie. He finds several friends with pies to offer, (pumpkin, honey, and rhubarb) but none are ugly enough to suit him. Each friend gives him an ugly ingredient and when he gets home he sets to "a-choppin' and a-mixin' and a-stirin' and a-fixin' and a-rollin', and a-makin' an ugly pie just fit for bakin'!" Author Lisa Wheeler provides the recipe at the end of the story.