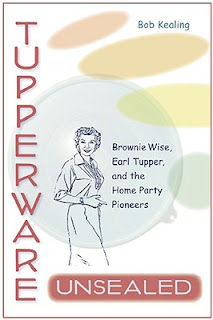 I love books about the history of a specific thing -- Salt, Olives, Aprons, etc. -- and this volume is part of that literary set. Tupperware was invented by Earl Tupper, a native of Berlin, NH, who later settled in Shirley, Mass.

"Postwar America was a period of tremendous innovation, in business adn at home. Countless products were invented for and marketed to the housewife, promising to make her work easier, to make her home cleaner, and her family's life better. More than a half-centure since its invention, Tupperware remains among the most memorable from those years of excess and optimism. While his product languished on department store shelves, eccentric inventor Earl Tupper sought a new way to market and sell his durable plastic storage containers. He found the sales revolution he was looking for in trailblazing businesswoman Brownie Wise. She
led the company from obscurity to millions in sales through a remarkable innovation: the Tupperware home party." (from book jacket)

The author spoke about his book at a Orlando Public Library program available on YouTube.
Posted by MaryR at 2:26 PM
Email ThisBlogThis!Share to TwitterShare to FacebookShare to Pinterest
Labels: Book of the Week 2009, Books About NH