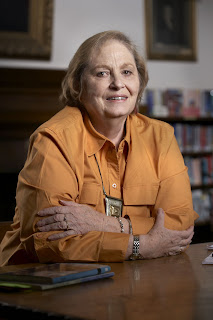 Approaching Seventy
A spider crawls beneath the screen,
designs a web in the corner and waits
with the patience of a calendar.
This is the end of summer,
scent of decay everywhere in the outside air,
flowers, planted last spring with such
a sense of promise, leaving one by one,
disappearing into the earth.
I think of endings--
final page of a novel
and the characters you've come to love
placed on the shelf,
a wave from a doorway-- those slight
or heavy sadnesses---
friend in Sagaponock the last time I saw her,
waving from the dock as the ferry pulled out
and the wake lengthened between us,
or swells on a stormy crossing,
pine boughs, dark, lifting and falling
in heavy rain, one night of my childhood,
beyond the small stair top bedroom
at my aunt's Vermont inn, as I lay awake--
wood smoke and voices from the lobby below,
a memory of suitcases standing by a farmhouse
front door, milk cans topped with snow, the pale
complexion of my mother who left and didn't return,
memory of lilacs--branches my brother and I used to climb through,
scratching ourselves as we hid from each other--
not long ago, at an airport, we hugged goodbye again--
what I left behind when I moved
to this senior apartment--some feeling of usefulness,
half of my books, most of my clothes.
Sometimes, it feels as if I've said goodbye to everyone.
Through the north window, I watch clouds move off
beyond my vision, and somewhere dissolve into rain.
Patricia Fargnoli of Walpole NH, a former New Hampshire Poet Laureate, is the author of five collections of poetry. Her latest book, Duties of the Spirit (Tupelo Press, 2005) won the Jane Kenyon Literary Award. She's received five Pushcart Prize nominations and been published in such literary journals as Poetry, Ploughshares, The North American Review, and The Massachussetts Review. Her featured poem, "Approaching Seventy" is previously unpublished and is included in her new book Then, Something which will be published by Tupelo Press this coming fall.

---------------------------
Approaching Seventy is used here with the permission of the poet, all rights reserved.
Photo by John Hession
Posted by MaryR at 12:33 AM
Email ThisBlogThis!Share to TwitterShare to FacebookShare to Pinterest
Labels: National Poetry Month, NH Authors, Poetry

Wow, does this hit home!

A beauty, Patricia -- even for us youngsters weighing (and still winging) in at not even sixty.

Can't think of anything to say that would capture the experience I had reading this poem - just want to say that it's an example of why poetry is as important as music. Thank you.

Can't think of anything to say that would capture the experience I had reading this poem - just want to say that it's an example of why poetry is as important as music. Thank you.
lm