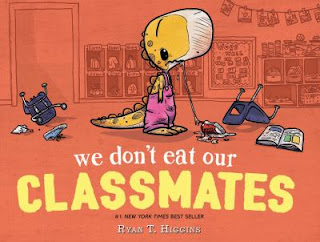 We Don’t Eat Our Classmates

It's the first day of school for Penelope Rex, and she can't wait to meet her classmates. But it's hard to make human friends when they're so darn delicious! That is, until Penelope gets a taste of her own medicine and finds she
may not be at the top of the food chain after all.

Questions: What things were you nervous about on your first day of school (or storytime)?