The Book of Maps by Ernest Thompson (Global Collective Publishers, 2022)

In the summer of 2002, Brendan Tibbet, a filmmaker whose luck has run low, takes his ten-year-old son Brenlyn on a raucous road trip across America. Following a 1930s travel guide Brendan purchased at a yard sale, the two-week trek from LA to New Hampshire covers 16 states, hitting the iconic stops along the way, Yosemite, the Great Salt Lake, Yellowstone and Mt. Rushmore and the Rock and Roll Hall of Fame, replete with wild exploits both hilarious and perilous, but it's the interior journey that is enlightening, deeply poignant and life-changing.

Brendan assures the boy that each state will be an adventure, and on the second day proves it, seeing the kid washed away in fast-moving rapids, then foolishly putting them both in danger by refusing to back down to the massive black bear invading their campsite. That's Brendan, impetuous and foolhardy, inciting trouble wherever he goes, a man with demons and bubbling angst. But neither of those missteps, or the many and scarier ones to follow, can begin to compare to the threatening storm cloud hanging over the expedition: the father's struggle to find the perfect, worst time to reveal to his son the news that will break his heart and affect everything to follow.

"In 1876, a fourteen-year-old boy from the Southern Italian town of Castelnuovo Cilento arrived in Philadelphia with forty cents to his name. By the time of his passing, C.C.A. Baldi had become one of the most well-known and successful Italian Americans in Philadelphia history. He started by selling lemons off a pushcart and, along with his brothers, eventually established a business empire that included a coal yard, a funeral home, a community bank and the largest Italian-language newspaper in America. Baldi was twice decorated a knight and a commander by the king of Italy and was the target of a political bombing assassination attempt. Author Charles G. Douglas, III, along with Victor L. Baldi, III, and Douglas Baldi Swift, present the rags-to-riches story of Philadelphia’s C.C.A. Baldi." --Publisher's blurb

Author Chuck Douglas graduated from the University of New Hampshire and received his law degree from Boston University in 1968. He served as legal counsel to the governor from 1973 to 1974, when he became a judge on the Superior Court. In 1977, he became a justice on the New Hampshire Supreme Court, serving until 1985. Douglas is the author of two other books on evidence and family law and is a trial attorney in Concord, New Hampshire. He and his wife, Debra, live in Bow, New Hampshire, where they serve as publisher and editors of the Bow Times, the local newspaper with a circulation of 4,100. 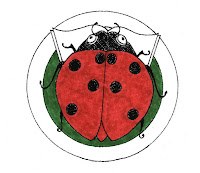 Last week we asked for input on the deadline for submitting 2022 Ladybug Picture Book Award votes.

Given that feedback, we have moved the deadline for sending in votes to to 11:30pm, Friday, December 23, 2022. We have changed online info to reflect this new date, but pdf publications still have the earlier date on them.

Please note that this change means that announcement of the winner won't occur until early in January 2023.

Posted by Mary Russell at 5:28 AM No comments:
Labels: Ladybug Picture Book Award

"Historian Mike Pride traces Harriet Dame's service as a field nurse with a storied New Hampshire infantry regiment during the Peninsula campaign, Second Bull Run, Gettysburg, and Cold Harbor. Twice during that service, Dame was briefly captured. Later, at the behest of New Hampshire's governor, she traveled south by ship to check on the care of her state's soldiers in Union hospitals along the coast. Dame entered Richmond shortly after the Union victory and rejoined her regiment for the occupation of Virginia. After the war, she worked as a clerk in Washington well into her 70s and served as president of the retired war nurses' organization. She also became a revered figure at annual veterans' reunions in New Hampshire. Late in the 19th century, she battled alongside her friend Dorothea Dix to overcome prejudice against bestowing pensions on women who nursed during the war.

'No Place for a Woman' draws on newly discovered letters written by Harriet Dame and includes many rare photographs of the soldiers who knew Dame best, of the nurses and doctors she worked with, and of Dame herself. This biography convincingly argues that in length, depth, and breadth of service, it is unlikely that any woman did more for the Union cause than Harriet Dame." --Publisher's blurb

Mike Pride is a journalist, writer, and historian. He is the editor emeritus of the Concord Monitor, where he ran the newsroom for 30 years, and the retired administrator of the Pulitzer Prizes. Pride has written, co-written, or edited seven previous books, including My Brave Boys, a history of the Fifth New Hampshire Volunteers, and Storm over Key West, a history of the Florida Keys during the Civil War.

Join NH author Mike Pride on Tuesday, October 25th, 2022, at 6:30 pm at Gibson's Bookstore where he will be discussing his newest book. 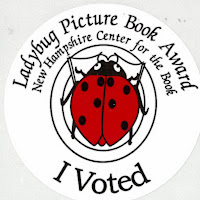 The guide includes information and activities for each nominated title and is a printable pdf.
New Hampshire children, from preschool to third grade, will select the winning picture book when they vote in November 2021. The deadline for sending in votes is (as of today) December 11, 2022 at 11:30pm. Voting materials, including ballots and a link to the online tally sheet, are available on the Ladybug web page.
Posted by Mary Russell at 5:30 AM No comments:
Labels: Children's Literature, Ladybug Picture Book Award 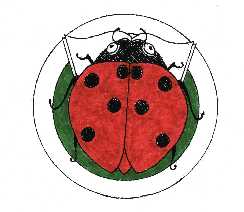 The voting deadline for the Ladybug Picture Book Award was set for Sunday, December 11, 2022 so that we could be sure to get the winner announcement made before the Christmas holiday.

The original deadline was set 14 weeks after Labor Day to allow time (even skipping Thanksgiving week) for all 10 books to be read and to have a voting week.

We have been asked to reconsider this deadline to allow more time to read the books.

This survey is intended to gather input on that issue:

The survey will remain open until late Sunday, 9/11/2022 and we will announce next week whether or not the voting deadline will be extended.

Cranks: Geniuses, Weirdos and Eccentrics From All Over New England by Eric Stanway (Emu Books, 2014)

"New England has more than its share of bizarre personalities, from Lord Timothy Dexter, who made a fortune from the most twisted circumstances, to Walter E. Tillinghast, who claimed to have buzzed all over the region in his own airship. Then there’s the famous “Leather Man,” who spent 30 years traveling in a wide circle, and General Daniel Pratt, whose nonsensical lectures made him a weird celebrity. Join us in an exploration of the most noted oddballs of the northeast, as we recount the exploits of these notorious eccentrics." --Publisher's blurb

Posted by Felicia Martin at 6:00 AM No comments:
Labels: Book of the Week 2022, Books in General, Looking for something to read?, NH Authors
Older Posts Home
Subscribe to: Posts (Atom)