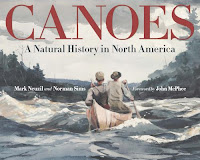 
Ancient records of canoes are found from the Pacific Northwest to the coast of Maine, in Minnesota and Mexico, in the Southeast and across the Caribbean. And if a native of those distant times might encounter a canoe of our day whether birch bark or dugout or a modern marvel made of carbon fiber its silhouette would be instantly recognizable. This is the story of that singular American artifact, so little changed over time: of canoes, old and new, the people who made them, and the labors and adventures they shared. With features of technology, industry, art, and survival, the canoe carries us deep into the natural and cultural history of North America.
In the foreword by Pulitzer Prize winner John McPhee, we dip into the experience of canoeing, from the thrilling challenges of childhood camp expeditions to the moving reflections of long-time paddlers. The pages that follow are filled with historical photographs and artwork, authors Neuzil and Sims describe the dugout and birch bark craft from their first known appearance through the exploration of Canada by fur traders, to the recreational movements that promoted all-wood and wood-and-canvas canoes. Modern materials such as aluminum, fiberglass, and plastic expanded participation and connected canoeists with emerging environmental movements.
Finally, Canoes lets us hear the voices of past paddlers like Alexander Mackenzie, the first European to cross North America, using birch bark and dugout canoes a decade before Lewis and Clark went overland, Henry Thoreau, Eric Sevareid, Edwin Tappan Adney, and others. Their stories are a tribute to the First Peoples who, 500 or 1,000 or even 5,000 years ago, built a craft designed to such perfection that it has plied the waters fundamentally unchanged ever since. -- Publisher's blurb

Join Norman Sims and Mark Neuzil for a talk and book signing at the Thayer Library in Ashuelot, NH on Saturday, April 29th, 2017 at 10:30 am.

The authors will also be at the Toadstool Bookshop in Keene, NH on Sunday, April 30th, 2017 at 2 pm where they will be discussing and signing their book.

Comments on this blog are welcome, but they are moderated. Comments that we feel make a positive contribution to the discussion will be posted. Thanks for stopping by!